No! You can’t take that away from me!

In amongst the swirl and the noise created by the suggestion of “Global Funding” and “COOLs” and other things in the Education (Update) Bill currently before the house, a really tragic change is about to be visited upon the school system and yet I hear no cries, of “Stop!” or allegations that the very heart of our traditions are being destroyed. No, just a silent acceptance.

I refer to the proposed change that gives to Boards of Trustees and Principals the right to decree that children reaching the age of 5 years might have to start school at the beginning of the next term rather than on their birthday.

Since the beginning of history going to school is what you did when you turned five. Any four year old, when asked about the forthcoming birthday, will reply to the question “What happens then?” with a bright and cheerful “I go to school!” “And what will you do when you get there?” the conversation continues. “I will learn to read and write!” is the confident reply from one who has yet to discover that learning is not always a piece of birthday cake! 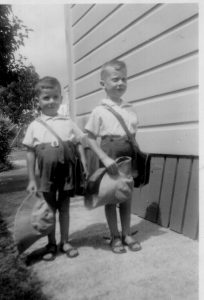 Most New Zealand homes have photos of the respective first days at school – nowadays often showing the poor little person in a grotesquely large school uniform that they will “grow into” sometime in the years ahead! My own mother made sure that my twin brother and I had a photo taken – new shirts, new shorts, new sandals, new school bag and a sun hat large enough to camp under.

It was a significant day not just for us but for Mum and our older brothers one of whom still went to the primary school. For one day of the year we were important. And when we got to school we joined a class of other little people but we knew some of them – they were from the neighbourhood. Others had been there a little while and could look after us – they knew the ropes. Miss White the teacher, a tall woman with a big boot on one foot paid special attention to us and the day went well. Actually this was not taken on my first day at school but the day before. This was because we were going to be too busy on the morning of our first day according to Mum.

But so important was this day that Mum, who had something of a feel for events which she would describe as “history” and therefore accuracy was a critical. After the first photo taken on this gloriously sunny February day in Hamilton we had to go and dress up in our wet weather gear in case it was raining on the first day at school! 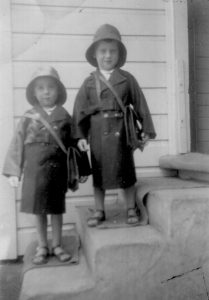 I always had my twin brother with me so never felt lonely or lost but what a relief it must be when a five-year old first goes to school to have the help of others in the class. Teachers make very effective use of this – “Tommy, will you show Stuart where the toilet is?” Imagine the chaos of a whole room full of newbies, five-years old, all having left their mothers or fathers, milling around wondering what to do, where should they be, and when is “Mum / Dad / Carer / Au Pair” coming back to get me out of here? It will be like a paddock full of lambs after they have had their tails docked and have not yet been reunited with the Mummy Sheep.

Once again, schools are to change their way of working to suit the grown-ups rather than taking account of the needs of the children. Once again we are doing something because Australia has done it – the old let’s-copy-someone-else rather than have the courage to do it our way.

Voltaire once said that “when it is not necessary to change it is necessary not to change.” Rather than simply promote the change, let’s have some reasons why it is necessary from a five-year old’s point of view to change our tradition of introducing young ones to school on their fifth birthday.